That’s the thought I am pondering for the day, people make me wonder. Yes, they surely do and I am starting to question this world around me even more. Being a person who tries to look for and at the best in people, against all odds sometimes. Well, my spirit is now starting to not respond the way it used to, I am feeling a bit troubled. I am the type of person who would never hurt anyone on purpose, thoughtful to a maybe ridicoulous extreme.

What has now dampenend my spirit, the demented actions of others. Why was I a target, I am kind and try to be cheerful to all I encounter, while minding my own business. I had an angel statue setting outside my door for quite a few years now. It was comforting and I liked it sitting there, it was my special angel. Well, imagine my surprise when opening my front door today and there’s the angel trashed and in pieces. Who would do such a thing, why this destruction? My neighbors and I get along, or so I thought and this has left me just a bit shaken. Nothing else was touched, just the angel statue. 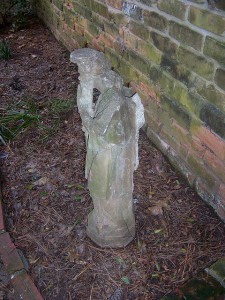 That is just something that crushed me to the core of my being, it made me cry. Not for the money involved in the cost of this beautiful statue, but for the invasive feelings that now haunt me. Is nothing sacred, I live in a small neighborhood and who could have done such an unspeakable act? Someone who hates angels, hates me or perhaps just a very unhappy and troubled person?

I don’t like the word hate, I rarely use the word. Of course the police being called, what can they do? They offer their sympathy and regrets, also knowing I am a person of peace. They will keep their eye on the small neighborhood, maybe ask some questions. It is a surprise to everyone that knows me…Why, Who and How did this happen? There has been a stir of problems between neighbors about Halloween decorations, but I wasn’t involved in any of this. I just honestly try to be at peace with all of those around me, some minor vandalism has gone on with pumpkins and decorations being trashed at some other houses. But why my angel? I used to feel at ease living here, it is a very small town, nothing that bad or evil ever happens. Oh my goodness, doesn’t that sound so cliche?

Nothing bad ever happens here, well looks like times are a changing. It just has left me needing to find some realm of peace back within myself. An alarm system perhaps, I have one on my car but only because it came that way. I feel as if I have lost something so precious, not the angel as such…Although I do think someone was quite troubled to do such a thing

. I would love to hear what others have to say about this, will anyone comment to this post? I would only like to hear some opinions and thoughts, what does anyone by chance reading this think? I know one thing, I will now be more watchful, does that mean I should stop trusting also?

I really do forgive whoever did such an unspeakable act…It helps, forgiveness sets me free. But how do I stop the hurt and these new questions lurking in the back of my mind? All I know is, I feel violated now and just not quite as settled anymore. Yes indeed, people really do make me wonder…

Anyone have any thoughts on this? I would sure appreciate them. Thank you so very much to anyone who took the time to read this.